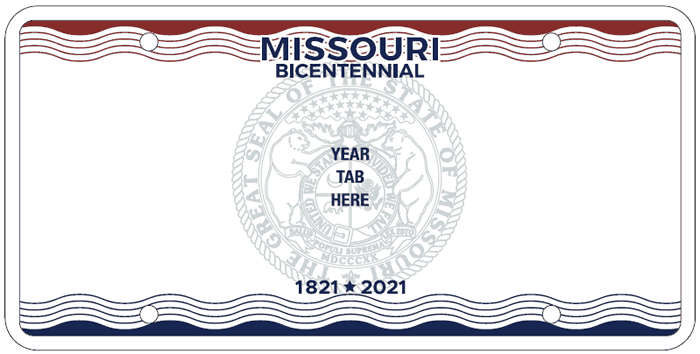 On August 10, 2021, Missouri will celebrate 200 years of statehood, or its bicentennial. You may have already noticed a change in license plates on our roadways.

To commemorate this historic occasion, the Missouri Legislature passed a law in 2016 requiring the Department of Revenue to begin a reissuance of license plates with a new bicentennial design, as of January 1, 2019.

You may be scratching your head asking why the state of Missouri is issuing the new Bicentennial design so early. Your DMV was required to being issuing the new design in October 2018 to ensure everyone will have received their new plate(s) by Missouri’s bicentennial in August 2021.

Most Missouri registration holders will be required to purchase new bicentennial license plates when their license plate registration comes up for renewal. However, individuals with specialty license plates, as well as permanent or historic registrations will be exempt. For more information on whether your current license plate design will be affected, refer to this handy chart provided by the Missouri Department of Motor Vehicles.

What if I don’t like the new design?
The State Historical Society of Missouri website was updated to allow Missourians to vote on potential license plate designs and provide feedback to the Advisory Committee. The voting poll was available from September – December 2016.

The chosen design is representative of the entire state, not specific to a certain region. It celebrates the bicentennial with red waves at the top of the plate and blue waves at the bottom of the plate to symbolize our Missouri flag and Missouri rivers, which figure prominently in the state’s historic role as a gateway for American exploration and transportation.

The design also features Missouri’s state seal in the center of the plate, the years 1821 and 2021, and a star. Additionally, the Missouri State Highway Patrol noted this new design offers the greatest readability of all plates tested for visibility during the day and nighttime hours.

If you do not like the current design you always have the option to choose personalized plates at an additional fee.

What are your thoughts on the new license plate design? We would love to hear from you.

If you are involved in an auto collision and need repair service, contact Spirit West Rapid Refinish at 636.386.8060 Monday through Friday between 9am-5pm, closed 12pm-1pm or stop by our convenient location at 14643 Manchester Rd., Ballwin, Missouri 63011.